This site, like the Selmer Amplifier Website, is a joint collaboration between Tim Fletcher and myself, Steve Russell. We both feel very strongly that the old British amps like Selmer, Watkins, and Fenton Weill together with a few others, have been pushed into the shadows by the admittedly well deserved publicity heaped upon Vox and Marshall, and these webpages are our attempts to redress the balance a little.

There are one or two other website now which deal with Watkins/WEM gear, the most notable of which are Charlie Watkins' own site of course, and Reg Goodwin's excellent Watkins Guitar World website. We therefore do not intend to go too deep into the history of the Watkins Electrical Music Ltd, as we have attempted to do on the Selmer site, because this is already well covered elsewhere.  At the present, we do not also want to stray off into the realms of the WEM PA systems that were so famous in the late 1960's and 70's. We are both guitar players, and so let's concentrate on instrument amps only for now. The PA's and speaker systems may come later. What we are therefore attempting to do is produce a record of the various guitar and bass amplifier models, their specifications, and their many variations throughout the period when Watkins/WEM were at the height of their fame.

As with the Selmer website, the philosophy that was adopted with this website was that we put down our joint knowledge on the subject. This relied on us using memory going back nearly 40 years, together with old catalogue entries and magazine articles, etc, so please accept our apologies if you find any errors !!

AN INTRODUCTION TO WATKINS AMPLIFIERS

The name of Charlie Watkins will forever be synonymous with two things :

His guitar amplifiers are less well-known, with the possible exception of the legendary V-front Dominator of course. He chose to position them at the budget end of the market, perhaps wisely recognising that competition was fierce at the top with Vox, Selmer and later Marshall vying for position.
Watkins (later Wem) amplifiers were well-made, sounded great (and still do) and easily undercut the prices of his competitors. Consequently they sold in countless thousands to young musicians, as did the Watkins guitars made by his brothers Reg & Syd.

Now for a potted history - very abridged as it's covered elsewhere:

Serving in the Merchant Navy during WWII, Charlie learnt to play the accordion and upon his discharge became a semi-pro player, often accompanied by a guitarist. In 1949 he opened a record shop in London as a side-line with his brother, and in 1951 moved into selling accordions and guitars. He made a first batch of 20 amplifiers in 1952, but that enterprise was near-disastrous as he had to recall them upon hearing of a guitarist being electrocuted by a similar AC/DC unit. Undeterred, by 1954 he had commenced production of the Westminster, a plain grey model at that time, and by 1956 when the skiffle & rock'n'roll guitar boom hit the UK, he had added the Clubman and V-front Dominator to his range. Demand became huge and the fledgling company expanded : in 1958 the Copicat became an instant best-seller, and by 1963 a dozen models of amplifier were offered.

In 1963/64 the Watkins company re-branded itself as Wem : the lovely two-tone coloured amps disappeared in favour of the ubiquitous black coverings which were more or less compulsory by then. Throughout the 60s Wem offered a range of combos including updated Clubman, Westminster and Dominator models and various "piggy-back" head & cab set-ups. The big development came in 1966/67 though, when Charlie developed his pioneering master/slave PA systems which for the first time made possible power ratings of 1000+ watts and literally set the stage for all the major outdoor pop festivals which followed. Wem catalogues quickly became showpieces for state-of-the-art PA systems, and guitar amps took a back seat.

Despite a proliferation of new names in the guitar amp market in the late 60s - Sound City, HiWatt, Laney, Carlsbro etc. - Wem soldiered on throughout the 70s offering a wide range of guitar, bass and PA amplifiers. In 1982, the company re-located from 66 Offley Road, London SW9 to Tritton Road, and then afterwards to a small factory close to his home in Upper Norwood, London SE19. Here Charlie operating on a smaller scale selling accordions, amplifiers and Copicats. Retirement was apparently an option which never seemed to have occurred to him.

Charlie Watkins, the grand-father of British guitar amplification, passed away on 28th October 2014. His legacy lives on and he will not be forgotten.

The development of each particular model is, we hope, covered in it's specific description, but some general notes may assist the visitor in identifying and dating amps.

Little is known (to us so far, anyway) of the very early Watkins amps c.1952-55 : they apparently had plain grey coverings, and according to Manchester's Johnny Reno who encouraged Charlie in his venture they had a "pre-war look about them". It seems that by 1956/57 the Dominator, Westminster and Clubman were established in much the same styling they kept until 1963, early models in maroon & cream coverings followed by turquoise & cream. (Interesting snippet : the turquoise is the same pattern as the fawn covering that Vox used in the early 60s - probably a Rexine leather-cloth.)

The process of re-branding into Wem in 1963/64 seems to have been a gradual one. First "day-glo" orange Wem logos replaced the brass Watkins logos, then black & cream coverings appeared, and finally by 1964 the whole range was re-styled into plain black cabs with red/gold diamond pattern grill-cloth, a cosmetic appearance which lasted well into the 1970s. 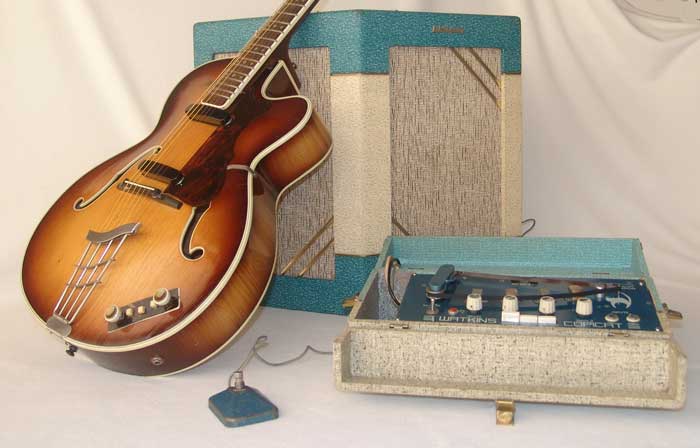 The Dominator is back!!